How can I Prevent my Cat from Getting Car Sick? 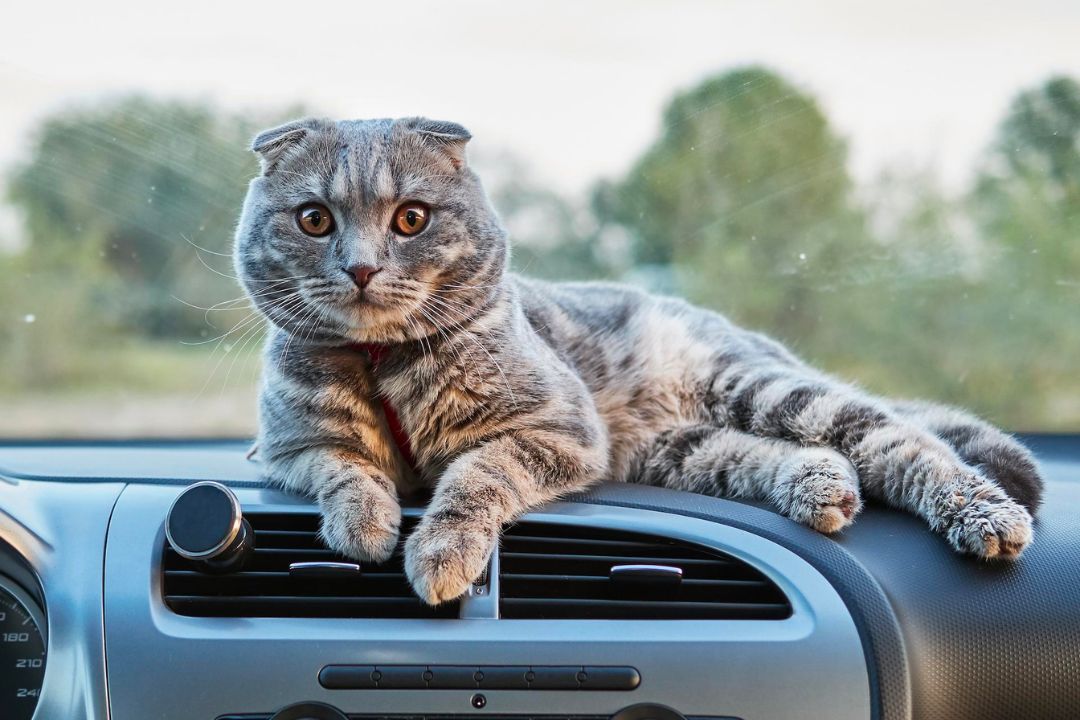 Does your emotional support cat always seem uneasy when it's time to hit the road? Well, like human beings, cats also suffer from motion sickness.

Motion sickness in cats is acute and brings them significant discomfort, which for the most part, is unnecessary. But why does it happen to them in the first place?

What Causes Motion Sickness in Cats?

Carsickness in cats occurs almost the same way as motion sickness in humans.

Motion sickness is most likely caused by a mismatch in movement information from different body areas. The brain senses movement by integrating impulses from the inner ears, eyes, muscles, and joints. A conflict occurs when the eyes signal to the brain that the body is still. For example, a moving car seems still to the cat riding in it, but the inner ears and other parts of the body signal that the cat is in motion. Because cats have sharper senses than humans, the mismatch can be highly uncomfortable.

How Do I Know If My Cat is Carsick?

In humans, motion sickness is easy to diagnose. You will notice the stomach discomfort and nausea in the person every time they are on the road because they will verbalize these issues to you. But animals can't explicitly tell you that they're sick. They'll show you.

Here's how to identify motion sickness in your cat:

How to Differentiate Poisoning and Car Sickness

How do you know if your cat suffers from car sickness and not something more lethal, such as poisoning?

Treating your cat for the right thing when they are sick is as crucial as getting them to the vet on time. As we have seen, vomiting and diarrhea are signs of carsickness, but they can also be signs of poisoning.

An essential distinction between poisoning and car sickness is that with cat poisoning, there will most likely be coughing, difficulty breathing, and seizures. These symptoms will be uncommon in car sickness.

If your cat shows any symptoms of car sickness when you travel with them, you need to take action. The best thing to do is prevent car sickness from happening at all.

How to Prevent Motion Sickness in Your Cat

The good news is there are several ways cat owners can prevent car sickness in cats. Placing the carrier in the proper position, for example, reduces the amount of motion the animal feels.

Other methods you can use to reduce car sickness symptoms in your cat include:

Placement of the Carrier

Movement in a car tends to be bigger or more exaggerated in the back seat than in the front. To prevent car sickness in cats, put the carrier up front if possible. This isn't always an option, based on the car's design, because airbags can hurt an animal like they injure a small child.

In some cases, the reason why a feline gets sick when traveling isn't because of a physical issue but because it becomes overly anxious about traveling and being in the car. Place the cat in its carrier in the car without starting or moving the vehicle, giving it some familiar items to play with.

When your pet is used to this, take it on regular, short car trips. It is beneficial to go to places other than the veterinarian so that the cat doesn't associate the car and travel with the stress and pain of a medical examination.

If gradually introducing the pet to places in a car does not appear to relieve the animal's anxiety, even after a few tries, the best option may be to get sedative medication from your veterinarian.

This is not ideal because any medication can potentially have adverse effects. It also can be costly over time, especially if an owner travels often.

Cats, like other animals, have a quick vomiting response in the throat. This response might be triggered more quickly if the animal eats before traveling. Don't give the animal anything to eat for at least several hours before the car trip. This way, even if the cat does not feel well and throws up, the amount of vomit won't be extreme.

If you are on the road for a long time, you will have to feed your cat at some point. Starving your cat for eight hours will only make them more agitated than you need them to be.

Feed your cat small portions of food at times they would normally eat. If you can, stop the car for around half an hour. Do not forget to keep the cat hydrated as well. If they aren't hungry, don't force them to eat.

Keeping the Car at the Right Temperature

When traveling, people typically have the luxury of being able to add or remove layers of clothing if they become cold or overheated. Animals cannot do this. Being too cold or warm during a trip can trigger vomiting, so a significant part of how to prevent car sickness in cats is controlling the temperature in the vehicle.

During cold months, adding some old towels or a throw blanket into the carrier can help the animal ward off any chill. If it is extremely frigid, try wrapping one or two gently-warmed stones in towels and putting them in the carrier. Some carriers come with pre-fitted electrical warmers that fit into a space under the bottom of the main compartment.

When the weather turns hot, do not put the cat inside the car until the air conditioning system has sufficiently cooled the vehicle's interior. Although the car's position will change as travel goes on, pay attention to where the sun is in the sky and try to put the animal's carrier in a position where the sun isn't beating down on it.

Placing a sun shield similar to those used to block the sun for infants on the car window can help. Instead of putting warmed stones in the carrier, use lightly-chilled ones. Make sure to stop often to give your pet water, and keep a towel available to moisten and drape over him if needed.

Regardless of whether the vehicle's heat or air conditioning is on, keep in mind what settings are in use and where the vents are directing the air. If the animal is too close to a vent and a high setting is on, it might get too much direct heat or cool air. Try to run the systems at a low, consistent setting rather than alternating between periods of blasted air and not having anything on.

A cat whose car sickness truly is motion related sometimes benefits from a small dose of dimenhydrinate often sold under the brand name Dramamine®. This is the same medication people take to prevent motion sickness.

But just like all other medications, Dramamine may leave your cat with some side effects. The most common of which are drowsiness and problems with urination. These side effects, although not life-threatening, need to be managed.

Please consult with your vet to ensure that the dosage given to your cat is appropriate for its size. Inform them of all the side effects so they can not have any abnormalities.

Reasons To Not Sedate Your Cat for Long-Distance Journeys

You may also have considered sedating your cat. Sedation will keep them asleep and stop them from being uncomfortable, right? Well, not quite.

Although it may seem the most reasonable, even humane, thing to do, sedation is terrible for your cat. The American Veterinary Medical Association believes that non-medical sedation confuses and upsets animals. Research also shows that sedating your cat could increase mortality rates.

In some states and countries, sedating your animals for long-distance travel is even illegal. Consider that regardless of their 'calmer' state, the mismatch in their senses is still going on. Your sedated cat will be immobile and only partially conscious. However, they won't be able to balance or otherwise manage their own body, so they won't be free to complain to alert you of their discomfort.

Such an experience in a situation where they already feel out of control, and anxious can be traumatizing. Sedation may seem more manageable, but it's not suitable for your cat.

Why You Should Get Your Cat Used to Car Rides

The best way to prevent your cat from getting car sick is to train them.

Begin by sitting in the car for a few minutes with your cat in his carrier, then go inside and reward your cat. These rewards will help them associate being in the car with something positive, laying the groundwork for the more difficult part.

Next, take short trips close to home. When you can, drive with them, even if it's just a short trip. This gives your cat practice for future journeys and helps get their senses used to the car's movement. You'll also learn about potential problems to anticipate and be on familiar terrain if you need to cut the trip short.

Repeat this process until the cat remains calm for several minutes, then several hours. Remember to stop when the cat seems uncomfortable or is starting to show any symptoms of car sickness.

Training does take a lot of work, but it's the best option to make because it makes your cat more adaptable to trips. If you forget medication or some other unprecedented change happens during the journey for some reason, your cat will have an easier time.