What are Some Reasons Why my Dog is Not Drinking Water? 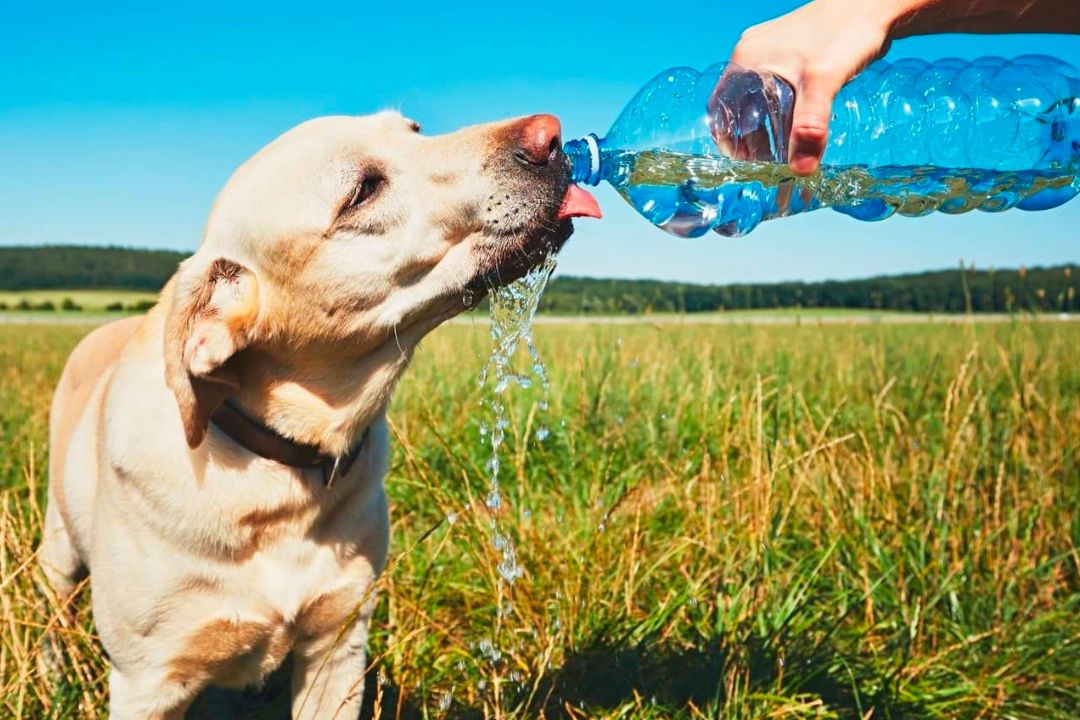 There are a number of possible reasons why a dog might refuse water, including illness, aging, an upsetting experience, or a change in surroundings or water source. There are also a number of tactics and tricks that can be employed to persuade a dog to drink again. If, however, the cause cannot be established, or the dog cannot be persuaded to drink, the animal should be taken to a veterinarian without delay, as dehydration is a serious condition.

Dogs, like humans, need to drink water every day and are at risk from dehydration if they do not do so. They are actually at greater risk than humans because they release heat from their bodies much more slowly. Some of a dog’s body heat is released through the pads of its feet and its nose, but it's body temperature is mostly controlled through panting.

Perhaps the first thing to check if a dog is not drinking water is that the animal is not suffering from an obstruction in the mouth that makes it painful or difficult to drink — sometimes it can be something as simple as a small stick or burr. If the dog is recovering from surgery or an injury, it is not uncommon for it to be reluctant to drink for a while. Switching from dry to wet food may result in a pet drinking less water, as it is getting more moisture from its food. Illness could also be a cause, and if the animal shows any other signs of ailment, such as unusual lethargy, or seems to be in pain, it should be taken to a veterinarian. If none of these seem to apply, the reason could be psychological, rather than physical.

Many dogs will avoid drinking water in strange places because the water smells different from what they are used to at home. These animals have an extremely acute sense of smell, and just a small difference in the composition of the local water may be very noticeable to them. Although dogs may seem unfussy about water quality — they will often drink out of ponds and puddles, for example — they may be very suspicious of anything that smells unfamiliar. It might be a good idea to try giving the dog bottled water instead of tap water.

Anxiety and some pain might occur when dogs are dealing styes. As we mentioned above the area around the eye can get irritated either ue to bacterial infection or debris that has gotten very close to the eyelid and caused irritation.

Sometimes, a change in surroundings in itself can have an upsetting effect on an animal. Some dogs are quite adaptable and will settle into new accommodation very quickly. Others, however, may be nervous or very set in their ways, and will initially be unhappy in their new surroundings. Usually, if this is the case, the pet will settle down and start drinking again after a day or two.

A change in circumstances at home can also cause this problem. Such changes might include the pet having to spend more time on its own due to a change in working patterns, or someone leaving the home permanently. Often, an animal that is lonely or upset will refuse to eat or drink. Again, it may settle down after a day or two, when it has become used to the new routine. If you notice your pet is anxious or not comfortable it could help to give them something that helps calm them down.

Our favorite products for anxiety are natural remedies like:

An older dog may also avoid drinking water. It could simply be that getting to the water requires too much effort, or the dog's sense of thirst may be diminishing along with its appetite. Older dogs especially need to maintain adequate hydration levels, so if drinking seems to be an issue, switching to a moist food might help. This not only provides extra water, it may be easier for an aging animal to eat. It is, however, best to consult a veterinarian before changing dog foods.

Persuading a Dog to Drink

There are a number of ways of persuading a reluctant dog to drink, some of which are surprisingly straightforward. Simply changing the position of its water bowl may sometimes work. Another solution that is often effective is mixing wet dog food with water. Even if the pet will not drink from its bowl, it may happily drink water from its owner’s cupped hands. It is also worth making sure that the water bowl is clean; if in doubt, giving it a good scrub with baking soda and water may help.

If the dog has recently had surgery or an illness, proper hydration is important to the recovery process. In any circumstances, a dog should drink regularly. If gentle coaxing and encouragement do not produce results, moistening the animal’s regular food with water may work. If the dog cannot be made to drink, it should be checked by a veterinarian as soon as possible.