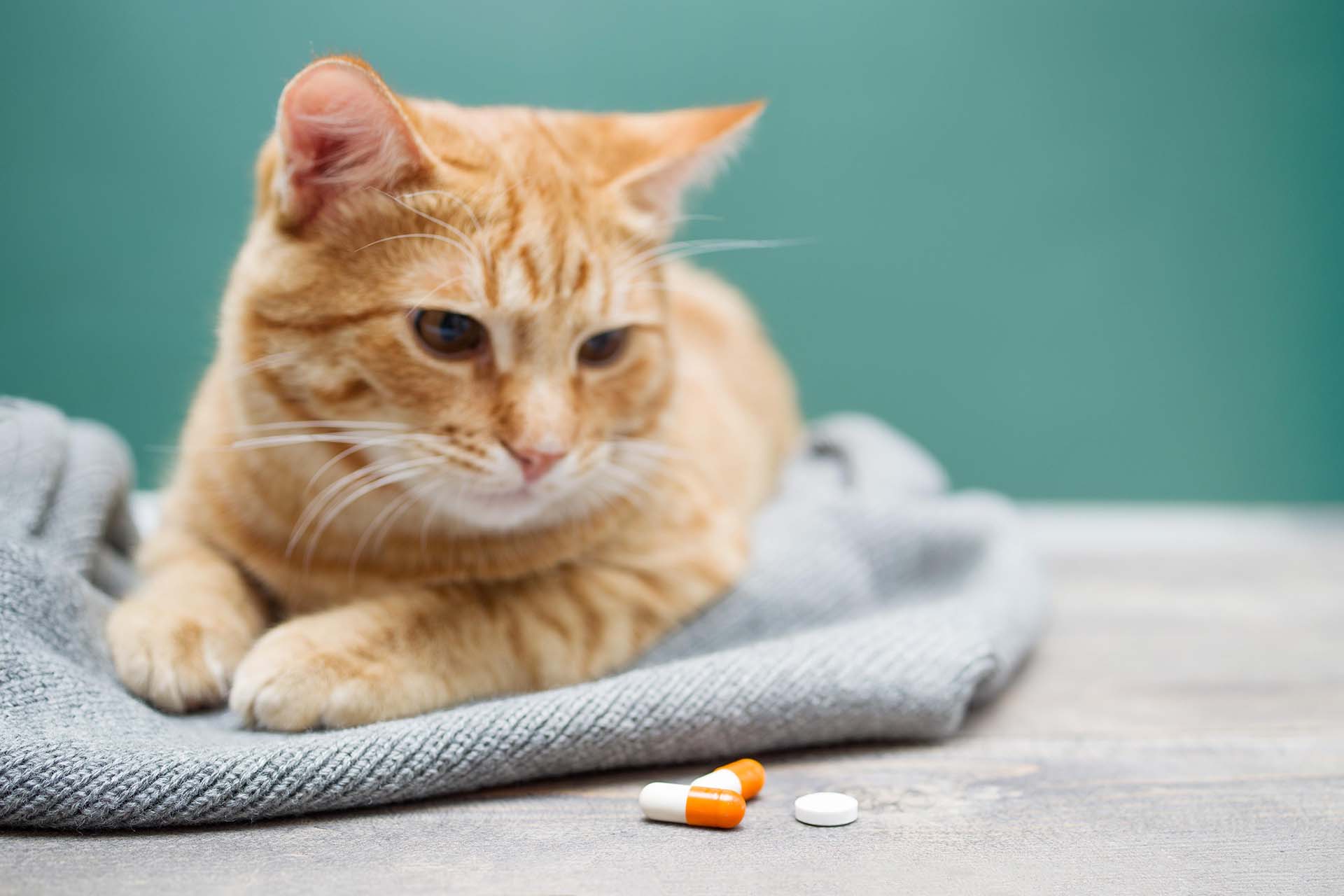 What Are the Uses of Mirtazapine for Cats?

In people, mirtazapine generally stimulates appetite. It also has an anti-nausea effect, reducing vomiting. When cats take the medication, they often experience these same benefits, so the drug can be useful when veterinarians want to make sure animals keep food and water down, or when the goal is to gain or maintain weight. A wide range of conditions can cause this need, but kidney disease, pancreatitis and depression are some of the most common. In some instances, people use this medication in pets because of its antidepressant properties.

Mirtazapine affects neuroreceptors in the stomach and intestine, making it hard for these organs and the vomit center of the brain to communicate. At the same time in the gut, serotonin, a chemical often associated with feelings of relaxation and comfort, is connected to proper digestion. High levels often trigger diarrhea as the body’s way of getting rid of toxins. This drug typically limits serotonin activity in the bowels, keeping digestion more stable.

Even as this substance reduces serotonin’s effects in the intestines and stomach, it usually amplifies them in the brain. It generally makes levels of norepinephrine, a neurotransmitter, go up as well. With a boost of these feel-good chemicals, mood often improves. This is why medical professionals use it to treat emotional imbalances.

Chronic renal failure (CRF) or kidney disease affects an estimated 20% of felines over age 15. Veterinarians aren’t sure exactly what causes it in many cases. Even so, they think that tumors, genetic issues, birth defects, infections and damage through other means like injury or poisoning might be linked to the problem.

Similar to what happens with people, when cats experience chronic renal failure, they usually are not able to filter out waste and toxins the way they should. This can lead to the development of anemia, electrolyte imbalances and other conditions, which can cause nausea, vomiting and weight loss. Mirtazapine for cats often reduces these symptoms.

Inflammation of the pancreas, called pancreatitis, is another feline condition that is somewhat of a puzzle to veterinarians. About 10% of cases are thought to be linked to infections, parasites, reactions to certain drugs, genetics or trauma. The other 90%, however, don’t have an identifiable cause. With this illness, cats don’t usually throw up, but they generally become very lethargic and lose their appetite, both symptoms treatable with mirtazapine.

Diabetes is an illness in which the body doesn’t produce enough insulin. As a result of the poor production, it isn’t able to metabolize glucose well, so the level of blood sugar goes up. Affecting about 1 out of every 400 cats, the disease is initially recognized through an increase in appetite, but as it progresses, the desire to eat typically drops. Weight loss often is a concern in moderate to advanced cases, which sometimes also include vomiting. Vets usually prescribe mirtazapine for cats when other medications or treatment options are not able to keep the condition under control.

Sometimes, cats become agitated, lethargic or depressed, either because of their health problems or because of old age. Vets often use mirtazapine to treat these mood problems because of the effects it has on brain chemicals, with the side effects of anti-nausea and increased appetite generally seen as secondary benefits. With felines, this typically is reversed, but because some of them still benefit from the relaxing effects the medication has, veterinarians do occasionally prescribe it to make animals more emotionally comfortable.

A typical prescription for a cat is for one dose every three days. This is only an average, however, and the exact amount needed in milligrams can vary, depending on the animal’s age, current weight and health conditions. Veterinarians usually look at these factors before giving instructions to owners, and they typically make observations to see if the amount is effective. Making one or more adjustments is relatively standard, especially because a pet’s condition can get better or worse over time.

Overdose of mirtazapine for cats is relatively rare, given the twice-a-week dosing schedule and cautious approach of animal doctors. Still, human error occasionally happens, and cats can get into things they shouldn’t. An owner should immediately contact a veterinarian whenever she notices adverse symptoms or unexpected behaviors.

Side Effects and Warnings

Some people experience drowsiness and dry mouth when taking the drug, but whether these are common side effects for animals remains unclear. It typically isn’t an appropriate medication for felines that have liver or hyperthyroid problems, although it still sometimes can work in these circumstances if the veterinarian closely monitors the cat. Serotonin syndrome, a condition in which serotonin levels get too high, can occur. Symptoms include problems such as general hyperactivity, high blood pressure and heart rate, shivering and dilated pupils.

Although few drugs interact with this medication, amitraz, selegiline and fluoxetine are exceptions. When a cat has been prescribed one of these substances, it should not also take mirtazapine. Veterinarians typically check for potential interactions before writing a prescription, but this relies to a large degree on the owner confirming everything the animal currently is taking.